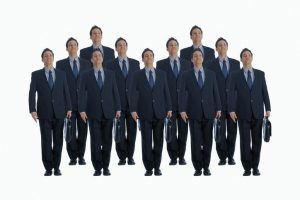 It’s that season when eager entry-level prospective law professors converge on Washington, D.C., to meet with faculty hiring committees who are also converging on D.C.  Last week, this meeting happened.

The goal?  Hire a candidate who looks and acts exactly like them.

Just kidding.  But that is often what happens.  Because law professors tend to suck at hiring.  Don’t get me wrong, you deserved to be hired.  But most of us who don’t fit a particular pattern or mold often feel like we were some sort of accident or fluke.  The reason is that law schools lack diversity.

We aren’t alone.  All of academia has the same entrenched problem.  As one post points out, “A 2016 TIAA Institute study showed that although the overall percentage of minority faculty rose from 1993 to 2013, only 10 percent of people holding all tenured positions come from these backgrounds.”  And, “women hold less than 40 percent of tenured positions and only 36 percent of the full professorships in American colleges and universities.”

Judging from law school web pages, we aren’t faring any better.  Bravely, Yale Law School and Yale University publish their data online.  While data isn’t available by socioeconomic status yet, the other Yale data is still grim:  The law (ladder) faculty is 37 percent female.  In the overall university, only 4 percent of the new hires are Black/African American and only 5 percent are Hispanic/Latino.  Progress comes at a snail’s pace.

But I’m not just picking on Yale. I’ve looked at over 50 law school websites this weekend.  And, at least among the tenured and tenure-track faculty, we’re all very much white and male.  Some schools appear to have NO minority tenure or tenure-track faculty members.  The bulk of us come from the same few schools.  That doesn’t sound like a diverse faculty so much as it sounds like a club.

The problem is partly because law schools have some common misperceptions about diversity.  What I say here applies to any diversity, whether it be race, gender, socioeconomic status, or political viewpoint.  Diversity enhances the intellectual life of a school.  It is necessary for student success and intellectual achievement.  And, the shortcuts law faculty members tend to take in hiring assure diversity isn’t there.

Here’s a checklist.  How many apply to your school?

___ Your school sometimes uses the term “quality” as a proxy for bias.  Quality is often mentioned when minority candidates are before the faculty for consideration.  It is often code for saying the minority faculty member didn’t go to an elite institution like others did, or didn’t have the same references (again, from that elite school) for the same reason.  Some schools have eliminated references from the hiring process to kill this network effect.  Some schools don’t have a job talk for that reason, too.

___ Your school uses “quality” as an even more insidious signal.  Ever had a candidate whose scholarship a faculty member describes as wonderful because it pushed the envelope and was high theory while that same language was used to punish a minority candidate because she pushed the envelope (too far) and her work wasn’t grounded?  Unless your school actually has standards for what it believes to be good scholarship, biases and louder voices will carry the day at faculty meetings, and you can be assured it won’t favor the minority candidates.

___ Your school perpetuates the myth that there just aren’t enough minority candidates.  For reasons I’ve discussed in previous posts regarding the entry barriers at those top two schools, that might be true.  But only if you think the candidate market is made up of alums from two schools.  In that case, you’re demonstrating elitism.   Imagine a broader world in which we entertain the notion that exceptional faculty might come from more than just two law schools.

___ Your school doesn’t apply the same rules for a minority candidate that it does for candidates who are the spittin’ image of most of you.   Again, Marybeth Gasman’s blog post above:  “I have learned that faculty will bend rules, knock down walls, and build bridges to hire those they really want (often white colleagues) but when it comes to hiring faculty of color, they have to ‘play by the rules’ and get angry when any exceptions are made.”  Language such as “he’s a superstar” signal that your faculty members might be biased towards one type of candidate versus another.  FYI: I have never, in all my years in academia, ever heard the term superstar applied to a minority candidate or a female candidate.  “Best athlete” searches tend to really call to biases.

___ Your faculty hiring committee doesn’t know what the hell it is doing.   Law school professors are the worst at listening to people from other disciplines or receiving training.  There are several best practices for making faculty more diverse.  Does your law school ignore them?  Reject them?  Do they engage in side-by-side comparisons of candidates based upon a broad profile of aggregate factors?  Does the minority woman always get ranked 2nd, voted down, or killed in committee or by a faculty member torpedo?  If so, you’re doing it wrong, according to the literature regarding biases in hiring.  There’s a systematic failure in your hiring process.  And if your hiring committee and your entire faculty isn’t trained regarding these issues, history will repeat.

___ You have that one faculty member (or perhaps several):  Even if you do manage to get diverse candidates for flybacks, it is entirely possible for one faculty member to disrupt the hiring process, if the faculty and dean let him or her.  Typical tactics include attempting to provoke the candidate before the job talk, monopolizing the job talk Q&A session, and other bullying behavior.  Or they might use the time with the candidate to show just how clubby you are, by dropping names of famous professors at their alma maters.

___ Your school seeks to assure that only Harvard and Yale alums are fully employed. You might, if institutional biases run amok, end up with a block of faculty all from the same school.  They will have the same views as to what scholarship means because they were all trained by the same people.  That group will instinctively reject those who are not like them.  Thus, your own faculty may very well kill any candidacy you manage to get through the door that bring diversity to the school.

How’d your school fare?  Don’t worry, you don’t have to tell me.  I can go to your school’s webpage and find out.  For 50 schools, I already have.

LawProfBlawg is an anonymous professor at a top 100 law school. You can see more of his musings here.  He is way funnier on social media, he claims.  Please follow him on Twitter (@lawprofblawg) or Facebook. Email him at [email protected].