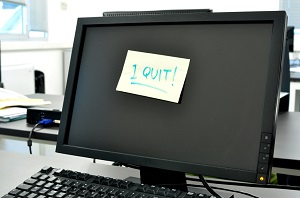 Some law schools just can’t seem to catch a break — and Thomas Jefferson School of Law seems to be one of them.

Last summer, Joan Bullock took over as the school’s new president and dean. Shortly thereafter, in November 2017, the American Bar Association finally took action against the school that started the law school litigation trend over allegedly deceptive employment statistics, placing TJSL on probation for being out of compliance with numerous standards required to maintain accreditation. Last winter, sources told us that the law school was experiencing financial troubles due to its reduced enrollment, which supposedly left the school’s administration unable to afford the rent at its beautiful building, once ranked as the third most impressive school building in the country. This past summer, TJSL closed its unaffordable campus and moved into an office building — one which has caused students to lodge many, many, complaints about their educational accommodations, with some even requesting partial tuition refunds. (For example, we hear students were using a “library” without internet, printing abilities, or air conditioning after hours.)

So, what’s the dean of a struggling law school to do after a little more than a year on the job? Make like a rat and flee that sinking ship — or whatever zoological-based analogy for “running like hell” you prefer. It seems that Bullock chose to resign over the weekend and let the school figure out its next steps. As of publication, her bio is still up on the law school’s website.

On Sunday morning, students and faculty received the news via email from Randy Grossman, chairman of the school’s board of trustees. Here it is:

Dean Joan Bullock has decided to step down from her position as President and Dean of TJSL.  We appreciate Dean Bullock’s enthusiasm and contributions during her tenure at TJSL, and wish her the best in the future.

I am pleased to announce that we have appointed Linda Keller to be Interim Dean, and Karin Sherr to be Interim President.  Linda has been the Vice Dean at TJSL for three years, and has served on the TJSL faculty since 2003.  Karin has been TJSL’s General Counsel since 2013.  Prior to joining TJSL, Karin worked in private practice, specializing in employment law.  We are confident that Linda and Karin, who have been key members of our leadership team for several years, will do an excellent job of continuing to provide TJSL with insightful leadership to advance the mission and values of the law school.

From the sound of it, Bullock is leaving Thomas Jefferson entirely, without staying on as a professor. At least she doesn’t have the shortest tenure of a dean who took over at a beleaguered law school. That award goes to Scott Broyles, who resigned from the deanship at Charlotte Law (RIP) after less than one month in the position.

Best of luck to Linda Keller and Karin Sherr as they attempt to lead Thomas Jefferson School of Law out of probation and into the future. We’re predicting that the ABA is waiting on the results of the July 2018 administration of the California bar exam to make its next move. Let’s see if TJSL is able to get a passing grade this time around.