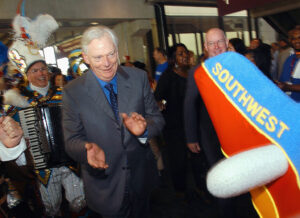 “My time’s more like fly time / Don’t call it getting dressed, call it in the sky time / If you ain’t a pilot, you probably couldn’t style it / Unless you was a stewardess, you won’t know what to do with this / First I took the time out, then I put the time in / Money ain’t everything, it’s more about the timing / So I got the Audemars, flawless diamonds / In other words, that’s called perfect timing / I feel like a favor, I feel like a savior / They clocking my neck, I feel like I’m Flavor.” — Fabolous

Earlier this year, Herb Kelleher, 87, passed away in Dallas, TX. Freelance writer Matt Crossman wrote a fitting tribute to the maverick, attorney, and founder in the Southwest Magazine March 2019 issue.  In honor of this airplane-industry icon, Guy Raz, Host of NPR’s How I Built This podcast, recently re-ran his November 2016 interview with Kelleher.

Throughout this interview, one can’t help but be in awe of Kelleher’s innovation, tenacity, and persistence. I’m a big fan of all of Raz’s interviews, but I especially enjoy the ones that feature law school alumni. Guy Raz has stated that his interview with Kelleher is one of his favorites and I have to agree.

At the University of Chicago, I studied Southwest’s business model in-depth for a class assignment on the Harvard Business Case Study — Rapids Rewards at Southwest Airlines. Then having gone to law school at SMU Dedman School of Law in Dallas and being a frequent flyer of Southwest Airlines, I became fascinated by and a big fan of the founding and culture of Kelleher’s progeny.

Raz’s interview of Kelleher has only added to Kelleher’s mystique. Kelleher may have stepped down from his role as Chairman of the Board in 2008, but his hearty laugh and LUVing legacy continue to reverberate to this day.  Here are some of my favorite Herb Kelleher career highlights from his feature in Southwest Magazine:

Many of us will be traveling this weekend and traveling specifically via Southwest Airlines. Let’s take a minute to tip our hats and tip back some glasses of Wild Turkey in honor of Herb Kelleher. For many of us, he democratized the skies. If you ever lived in Dallas, it’s likely you’ve heard a tall tale about Herb. After all, he was simply larger than life. If our lives are to be measured by our stories, then it’s safe to say that Kelleher lived one hell of a life. Hopefully, we can all claim the same when it’s time to close the cover.

Renwei Chung is the Diversity Columnist at Above the Law. You can contact Renwei by email at projectrenwei@gmail.com, follow him on Twitter (@renweichung), or connect with him on LinkedIn.