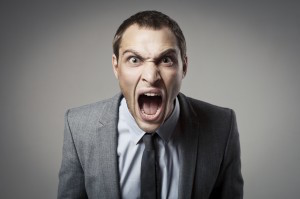 Neighbors can be a trial, especially here in New York City. Mine once held a two-week long funeral in the backyard; I was quite relieved to find none of the earth mounded or otherwise noticeably disturbed when it ended.

In any event, when you’re as tightly packed and stacked upon one another and generally cheek-by-jowl as we are, those adjacent to you are likely to find countless ways to annoy or irritate or generally get under your skin. Like, for instance, when they get hammered, lose their keys and then decide, in the wisdom of their inebriation, to ring ever buzzer in the building at 3 a.m. in hopes someone will let him so he can presumably sleep in the vestibule or a hallway. We imagine this might be especially grating to they, let’s say Type A personalities who become hedge fund managers at Half Moon Capital, even if the offense occurs early on a Sunday morning and not on a school night.

Be all of that as it may, should this happen to you, we implore you to either ignore the buzzer, yell at your neighbor through the intercom or from the window, or just let him in. What you definitely do not want to do is go downstairs with a metal object and proceed to allegedly pummel your neighbor with it, as this is a felony and will force you to go on the run.

Police say Eric Delamarter, a Columbia University graduate, hit a man in the head with a metal object last month before slamming slammed his head against the lobby door…. The victim suffered a large gash above his eye.