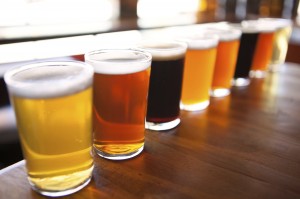 You might remember that during the Kavanaugh hearing, the Federalist Society hosted an event titled “I Still Like Beer” about regulations on the beer industry. It’s the kind of casual humor at the expense of sexual assault victims that conservatives go in for now.

What you might not know (unless you follow @atlblog on Twitter), is that the bar where they hosted the event, Ithaca Beer Co., disavowed the event.

Ithaca Beer had nothing to do with the naming or delivery of the communication/promotion of that event and feel equally strong that the use of Brett Kavanaugh’s quote was distasteful and inappropriate. We communicated that sentiment to the organizers of the event.

Turns out, the Ithaca Beer Co.’s (belated) stand is kind of a trend. A group of college Republicans at the University of Washington wanted to hold an event called “Beers 4 Brett,” at Shultzy’s Bar and Grill. There the owners told them to take their business elsewhere.

“Shultzy’s is a sports-themed bar & grill that welcomes everyone. We do not promote or endorse any one religious or political viewpoint. As such, due to the political nature of your planned event, we request that you find another venue to celebrate.”

Predictably, this led Republicans to cry that they are being discriminated against. As usual, these people like the First Amendment just fine when it’s being used to humiliate gays and lesbians trying to patronize an establishment. But when an establishment doesn’t want to promote the retrograde views embodied by Brett Kavanaugh, Republicans suddenly discover the 14th Amendment. From Takeout:

An attorney representing the group told [the president of the UW College Republicans] that “in Seattle, that’s illegal. Because political opinion, political ideology is a protected class like any other.”

Apparently, 15 members of the college Republicans went to the bar anyway. And were served drinks! So the only problem here is that the bar didn’t want to promote “Beers 4 Brett.” It’s not like the bar was asking people to show their 23 and Me results and punching all the pure Caucasians at the door. It’s not like they were saying “anybody in a MAGA hat go get your food from the kitchen.” The bar simply declined to promote a justice who has been credibly accused of sexual assault or harassment by multiple women.

It is very frustrating to see laws and legal theories promulgated to protect vulnerable minorities from white supremacists now used by Republicans to foist their white supremacist views into public spaces. But that is the world as it exists today.

Luckily, the First Amendment isn’t just here to protect rape apologists on Twitter. It also means that private establishments cannot be forced to repeat Republican talking points. If a Kavanaugh supporter wants to go have a beer, they should feel free. I will certainly feel free to yell at them in public.

But no bar is required to host your pro-alleged-attempted-rapist party. That is also how the First Amendment works.