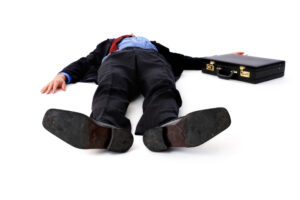 We’re still in the middle of the administration of the February 2020 bar exam — some test takers will be finished today, and some still have one more day to go. Whether or not you passed or failed, whether or not you experienced any of the bar exam horror stories we’ll shared with you over the next couple of days, you will not have a story as dramatic as this California test taker.

Tipsters report that at the Oakland Convention Center, someone had an epileptic seizure while the instructions were being given. Here are the details:

Around 8:40 a.m., as the preliminary announcements were underway, a test taker suffered a seizure. A combination of proctors and fellow test takers with medical training came to his assistance, moved him onto the ground on his side, and 911 was called. It took maybe 15 minutes for paramedics to show up (certainly more than 10) during which time the individual either had difficulty breathing or may have stopped breathing according to what those treating him were saying. Fortunately he came back from being seemingly touch and go after a few minutes and seemed to regain consciousness and was even able to respond to those treating him prior to the arrival of paramedics.

Paramedics arrived and treated him and eventually took him away on a stretcher, about 30 or so minutes following the start of the incident.

Kudos to those on site, proctors and test takers, who rushed to this person’s aid to take care of him until paramedics arrived. There didn’t seem to be much protocol in place for how to handle (especially given that there weren’t many people with phones) but those who knew how to help did. I haven’t witnessed a seizure up close before, but seeing as how he stopped breathing for a time, and how long it took help to arrive, those present certainly may have helped save this person’s life by administering prompt assistance before the professions appeared. (Not to make light of the incident in any way, but because we’re talking about the bar, I will note that we fortunately did not have a case of negligent rescuers here — those present were awesome, including keeping those with no training away to not get in the way of those who knew what they were doing.)

The room gave a round of applause to the individual as he was wheeled away. Hopefully he is recovering okay. It would be pure speculation to say whether the stress of the exam had anything to do with this, but it was certainly a perspective-inducing event to kick off the day.

The instructions announcer resumed on script as soon as the individual had been taken away, approximately 35 minutes after the start of the incident. The instructor paused when reading part of the instructions (though he stuck to script) when he said, “In the unlikely event of an emergency… do x, y, z…”

Another tipster says that as the test taker was wheeled away on the stretcher — laptop still in his lap — he gave a thumbs up to everyone in the room. We certainly hope that everyone fared well on the test after witnessing such a frightful start to the day.

What was the craziest thing that happened during the February 2020 bar exam? If you survived or witnessed some horror story in action, let us know. You can email it to us (subject line: “Bar Exam Horror Story”) or text us (646-820-8477).