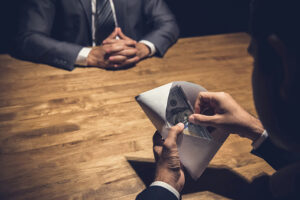 Leonard Leo, the co-chair of the Federalist Society Board, the man responsible for getting four Supreme Court Justices and hundreds of federal judges confirmed, would have you believe he just this very moment discovered political dark money. Axios reports this morning that Leo will “step aside from the daily running of the Federalist Society to focus on a new venture — inspired by Arabella Advisers on the left — that will funnel big money and expertise across the conservative movement.”

Leonard Leo, who has been payed upwards of $400,000 a year by the Federalist Society, which does not disclose its funders, who shepherded $250 million of dark money to influence judicial selections between 2014 and 2017 through a secretive network of non-profits, which do not disclose their donors, would have you believe that it was only from watching liberals in the 2018 election cycle that Leo realized he was going to have to start getting serious about spending money on judicial confirmations.

Leo told Axios that he and his business partner, conservative communications executive Greg Mueller, studied tax filings that led them to Arabella, a little-known yet powerful consulting firm that advises liberal donors and nonprofits about where to spend their money.

Oh, please. Citizens United v. FEC was decided on a Thursday, but it wasn’t last Thursday. We are ten years into John Roberts’s gift of unlimited money sloshing around politics, which is approximately nine years too late for Axios’s Jonathan Swan to report with wide-eyed credulity that Leo took a peak at what liberals are dong and decided he’d need to spend a “minimum of $10 million issue advocacy campaign focusing on judges in the 2020 cycle” just to keep up with the liberals. These guys spend ten times that every single election cycle.

Leonard Leo didn’t get the idea to start injecting money into politics from a Politico piece on a liberal fundraising network with “stunning reach and influence as part of ‘an unprecedented gusher of secret money’ that ‘boosted Democrats and liberal causes in 2018.’” This guy invented dark money!

The Center for Responsive Politics, which tracks money spent on campaigns, noted just last week that:

At the crux of that network is Leonard Leo, Trump’s top outside judicial adviser and a longtime executive at the Federalist Society who helped shepherd Trump’s Supreme Court picks through the confirmation process. Leo holds leadership positions with multiple groups in the network.

So Leo may have figured out a different conduit for the dark money, one that allows him and Mueller to bill themselves as philanthropic consultants, but it’s the exact same game he’s been playing for a decade. And he’s not being forced into this because of some dark money arms race with Democrats. Arabella Advisors is just the newest bogeyman now that a rash of anti-semitic attacks have made it untenable to hold up George Soros and the Open Society Foundation as the liberal arch villains.

Come on, Axios, do better. Google is free!