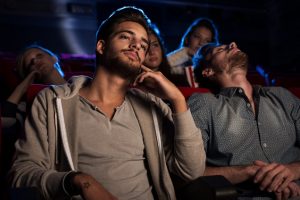 Law schools make all kinds of deals with rich donors to keep the money flowing in. They’ll name the whole damn school after you if you are rich enough. That’s nothing new. Harvard is named after some rich white dude who gave away a lot of books.

One of the school’s rich and influential donors is a man named James Woodrow McGlothlin. He’s the founder and CEO of The United Company, a financial services, oil, and gas conglomerate. He draws a lot of water at William & Mary, and he showed up to speak at the vainly named “McGlothlin Leadership Forum” last month.

Tipsters report that law students and business school students were asked to attend, and told “specifically” to be “respectful” to Mr. McGlothlin.

Already, that’s a red flag. The law school administration should not be using its own students as props to make a rich donor feel important. But, whatever, I can appreciate how the world works. If a wealthy investor stops by my office for lunch, I’m going to chew with my mouth closed and put down my phone.

But McGlothlin’s speech seems to have been anything but “respectful” of his diverse audience. A tipster reports:

At the actual luncheon, Jim McGlothin proceeds to go on a racially charged political rant holding the audience captive. Students were told to not leave and not cause a scene. He touched on how immigrants were changing the values of this country, how leaders come from 2 parent households, how certain Americans wouldn’t be shot by the police if they were respectful, how Kavanaugh was wronged and the list goes on. The administration just sat there and allowed him to talk for the entire time… Afterward, he then goes on to a detailed story of how he sued a man for libel for posting a status on Facebook about him. He tells this antidote under the guise of a personal jurisdiction mini-lesson for law students, but many students saw this as a threat. McGlothin has a lot of money and holds alot of power at W&M… After he spoke, students were then pressured to stand in respect. When students appeared to not want to, apparently the Director of Alumni Affairs Morgan L. Hunter turned around and told the students at her table that they needed to have some respect for the man that gives millions to the school and demanded they stand even if they didn’t agree with him.

Man, even FedSoc doesn’t require you to stand and “Heil” at the end of one of their lunches.

Apparently, McGlothinlin’s speech went down so sour with students that, after the luncheon, Vice Dean Patricia E. Roberts needed to send an email around to the school, offering people an opportunity to talk about how pissed they were.

You know a talk has gone bad when you need to have a follow-up talk to discuss the initial talk.

At the meeting, our tipster reports the administration tried to excuse McGlothin’s remarks:

At the actual meeting, the dean says he doesn’t agree with McGlothlin but then tries to paint McGlothlin in a more positive light and essentially says you need to get to know him and he actually does alot for minorities. At no point does the school officially condemn the statements made by McGlothin but is just attempting to do more damage control through town halls.

Students were understandably not impressed. Here’s one note that was left on Facebook.

William and Mary did not respond to requests for comment about this issue.

I usually don’t comment on “no comments,” and it’s not unusual for law schools to ignore us on stories they don’t like. But here, it just emphasizes that the burden of allegedly racist rhetoric falls on students and communities of color.

Nothing’s going to happen to Jim McGlothlin. He’ll face no consequences for what he said, won’t care about who he offended, and will probably pass the whole thing off as millennials being sensitive. William & Mary will still kiss his ass. And white students at William & Mary will probably get over the whole thing days ago, while the “wokest” among them might give a nod in the “sorry man, that’s messed up direction.”

It’s minority students who have to deal with the fact that their law school will force them to listen and applaud any old kind of ridiculous, racist rhetoric, and will defend the speaker, if that speaker is rich and white enough to be important to the university. They have to know that, and know that their deans and administrators won’t even disavow allegedly vile comments in the press.

It’s a hard lesson, no many how many times you have to learn it. I speak from some EXPERIENCE here. It is damn hard to be sitting in a room with some white person, listen to that white person saying foolish things, and know that white person is protected by a shield of money and other white people so thick that if you even roll your damn eyes, you’re the one who is going to get in trouble. The first time I remember being aware that a white person was too rich for me to scream at, I was in middle school. The most recent time was like last Tuesday. It won’t be the last time. EVERY F**KING TIME, it takes days off my life. I don’t know that the average white person has any idea how often minorities are required to hold their tongue in the face of white power. Maybe that’s why so many of them are “surprised” when they catch a brother or sister in a moment where a particular white person’s power and privilege is not enough to command silence.

It never gets any easier.