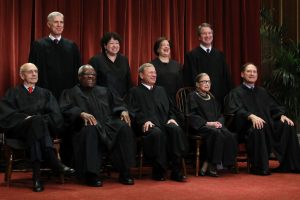 Pity the poor Boomers! With a paltry 57 percent of the country’s wealth to their name, those sprightly 55- to 73-year-olds just can’t catch a break. Yesterday Chief Justice John Roberts invoked their grievous plight during oral argument in Babb v. Wilkie, an age discrimination case filed against the Department of Veterans Affairs.

The transcript records laughter in the courtroom. Or, as SCOTUS blog put it, “A dozen or so high school students in the second and third rows of the public gallery perk up and nudge each other over this au courant phrase.” (The joke writes itself.)

But as hilarious as it is when, you know, the Justices try to meme from the bench, the fact remains that the conservatives are aggressively trying to strip employment discrimination protections from federal workers.

Here, plaintiff Noris Babb is a is VA pharmacist who sued because she was denied advancement opportunities that were given to younger colleagues. In the private sector, under Gross v. FBL Financial Services, an employee must establish but-for causation to recover.

Babb argues that the wording of the Age Discrimination Employment Act’s provisions covering federal workers is slightly different, and thus the employee can recover for generalized policies which favor younger employees, without establishing a but-for linkage. Or, as her attorney Roman Martinez put it:

The government, in this case, apparently believes it’s perfectly lawful for , federal agencies to apply younger-is-better or whiter-is-better hiring policies to individuals who can’t prove that they would have been hired but for those policies.

Which is apparently fine by Justice Gorsuch, whose main concern is that allowing a more permissive federal standard will force public sector employers to get rid of generalized preferences that don’t rise to the level of but-for discrimination. And then where will we be!

The Solicitor General suggests that if we were to adopt your view, we’d have to do the same thing with respect to private discrimination under, what is it, the 623. Which, of course, we can’t do because of Gross, and point specifically to the language saying, you know, you can’t discriminate in hiring or otherwise, right, discriminate with respect to terms and conditions of employment. And if we were to adopt your broad reading here of “discriminate,” why wouldn’t we do the same thing there?

So we actually care about precedent when the issue is curtailing the rights of federal workers to combat age discrimination. Got it. Let’s see if that holds up in seven weeks when Justices Kavanaugh and Gorsuch get the opportunity to shut down the last abortion provider in Louisiana in June Medical Services, LLC v. Gee.