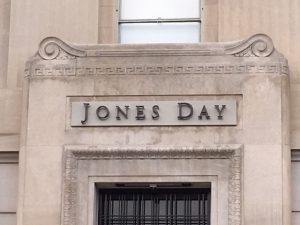 Not to downplay all of the more important issues at play in the $200 million gender discrimination lawsuit against Jones Day, but the simplest takeaway from the brewing battle is this: Jones Day would rather fight a pitch battle over gender discrimination than join the rest of Biglaw in being upfront and honest with its employees about compensation.

The firm could defuse discrimination concerns quickly by opening up its black box — that it hilariously claims is not a black box — but it doesn’t want to invite all the criticism that comes with it. Is this because the firm is systematically discriminating against women (and minorities) as the lawsuit suggests? Keeping compensation under wraps was infamously how Lilly Ledbetter found herself on the short end of decades of discrimination. Or maybe the firm just knows it risks reputational damage if they told the world that they are not capable of keeping up with the big kids. Whatever it is, the firm feels that fighting this case tooth and nail — including seeking sanctions against the attorneys bringing the claim — is better than the disinfectant of transparency.

It’s in pursuit of sanctions that Jones Day offered up its Orwellian defense of keeping associates in the dark about pay:

This is, of course, the party line of any employer trying to pull a fast one past the workers. Hiding between the lines of the superficially fair statement is how an employer banks on those feelings of private embarrassment to keep undercompensated employees from opening up and, potentially, learning that the excuses made to short their pay had no impact on a similarly situated co-worker. Attorneys are professionals… feel free to treat them that way.

Despite claiming that everyone’s happy because compensation is a black box, Jones Day argued without missing a beat that the plaintiffs’ attorneys should be sanctioned because they could have easily figured out their whole pay scale by just emailing around the firm and asking. Apparently the arrogant top earners and the embarrassed paupers are expected to be totally open amongst themselves about pay? It’s a mind-blowing pivot.

It’s almost as though the zeal to levy sanctions is getting in the way of the rest of the Jones Day defense. The firm claims that discovery is bearing out their claim that pay varies on a gender neutral basis and yet, it argues, the plaintiffs shouldn’t have needed discovery because it was so easy to unravel this admittedly confidential system without the legal process.

Do they have two different teams working on the sanctions and the case proper? Because if so, the sanctions team should be paid less.

In the very near future, we’ll be unveiling a form to allow attorneys — at Jones Day and elsewhere — to confidentially inform us of your compensation. You’ll stay anonymous but your contribution to this project will help us report on firm pay patterns going forward. Keep an eye out in the coming days and please chip in, even if you’re paying a relatively boring lockstep salary.