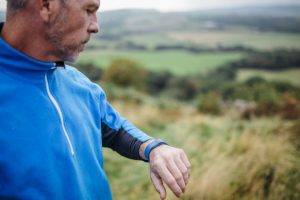 Technology has provided advanced methods for police to catch criminals.  Close-circuit television is so pervasive that anyone planning a heist shouldn’t show his face within a mile of the crime scene unless he wants to get caught.  Smart police will go to every street corner, red light, deli, and gas station within a mile radius to upload video.  Wearing a mask won’t help if it’s left at the scene (as one client of mine did).  The barest trace of DNA, even through a sneeze, can be extrapolated to connect a suspect to a crime.  Even if you have no prior criminal history, and therefore none of your DNA is in police databanks, relatives might have shared theirs with genealogy data bases that can be used to track you. A criminal defender provides the highest level in this area of expertise.

But of all the complex forensics that crime-scene investigators use, there’s a relatively new one that’s easy to understand and not intended for solving crime mysteries — the band people wear around their wrists to monitor their physical health, a fitness tracker, while also getting a good physical condition with the use of supplements people get online  go to this site to find more about this.

These trackers use something called accelerometers to analyze the wearer’s motion — steps taken, duration, intensity, distance travelled, calories burned, and sleep quality.  Forensic experts have recently relied on them to both exonerate a suspect or prove his guilt.

Karen Navarro, a 67-year-old woman from San Jose, CA, was wearing her Fitbit when police found her stabbed to death.  Her father in law, 90-year-old Anthony Aiello, had been visiting and told police that Navarro walked him to the door of her home then handed him flowers to thank him for the visit before he got in his car and drove away.

Police gathered video from nearby streets to pinpoint when Aiello left the house.  They also forensically examined Navarro’s Fitbit bracelet to determine at what time her heart rate accelerated rapidly, diminished, then finally stopped all together.

At the time her heart stopped, Aiello was still in the house and not driving away as he told police.  Aiello was arrested and charged with murder.

In another case in Wisconsin, George Burch was tried for murdering Nicole VanderHeyden, a young mother of three who was beaten to death and left in an open field.

Detrie, however, was wearing a fitness tracker when the murder occurred. It proved his movements at the time of the crime were so minimal he couldn’t possibly have beaten the deceased and then dragged her body to a field.  Burch was convicted.

In December 2015 in Ellington, Connecticut, a Fitbit tracker helped disprove the story Richard Dabate gave police when his wife, Connie, was found dead in their basement. Dabate told police an intruder had shot Connie almost immediately upon entering and tied him to a chair.  He said he used a blow torch to defend himself against the intruder and was found half tied to a chair when police arrived. However, police questioned his version after examining the Fitbit Connie wore around her waist.  It showed that at the time Richard claimed Connie was shot, she had been walking around the house some 1,217 feet.  During subsequent questioning of the husband, police learned he had a pregnant girlfriend and had promised her he’d divorce Connie.  (The case is yet to be tried.  Dabate is out of jail on one million dollars’ bail.)

Lawyers in civil cases, too, have used data from fitness trackers to show changes in their clients’ activity patterns in weeks and months before car accidents or slip and falls.  In efforts to get higher damages, the Fitbit shows the level of high-intensity activity their clients engaged in before their accidents and that but for their mishap they would be leading just as active a life.

But as Fitbit forensics become more common, I wonder how people seeking to mislead police will profit.  Let’s say a jeolous husband wants to frame his estranged wife’s lover for a crime.  The husband puts his Fitbit on a sleeping friend to show he never left his house, while in actuality he snuck out and killed his ex.  Returning later, he could put back on the tracker to make it look like he’d been sleeping sound as a baby.

Weirder things have been known to happen.

Toni Messina has tried over 100 cases and has been practicing criminal law and immigration since 1990. You can follow her on Twitter: @tonitamess.