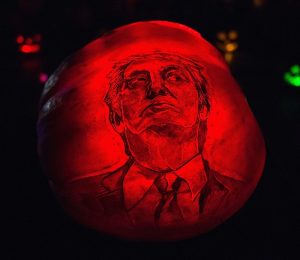 We could live in a world where leaders, and people who would be leaders, hold themselves to the highest level of conduct where even the mere appearance of bias is cause enough for withdrawal or resignation.

In related news, if I had wheels I could pass myself off as a wagon. In our actual world, the very highest leaders and office-holders are telling us that the right strategy is to deny, deny, deny and hold onto office even if it rips the country apart. That’s the message emanating out from Washington, and that message can’t help but touch the next generation of leaders. People like Donald Trump and Brett Kavanaugh will one day be gone from the public stage, but their rejection of propriety will scar millions who find themselves in controversies, big and small.

At George Washington Law School, a storm has broken out over some alleged anti-Semitic comments, and somehow everybody is worse off for it.

The issue started with the Jewish Law Student Association being brought before the GW Law Student Bar Association on charges that they violated the SBA’s policy for serving alcohol at events. There was some issue with the JLSA poster and the organization was looking at being sanctioned and potentially prohibited from serving alcohol at future events.

Allegedly, before the meeting or hearing or whatever, the President of the GW Law SBA, a woman named Ali Kingston, privately told another person: “Tell your Jew friends, I’m coming for them, they need to stop violating the alcohol policy.”

Later, and potentially unrelated to the alleged comments, somebody posted the offending JLSA poster in the SBA offices, with the violations circled as an example of how not to do a poster. Always remember law school is like the high school in Clueless set in the prosecutor’s office in Law & Order photobombed by a couple of people who think they’re Daredevil. Members of the JLSA saw their poster “being made an example of,” and… somebody told them that the SBA president “hates Jews,” or something to that effect. It’s honestly unclear if the person who said that was aware of the previous comments about “Jew friends,” or if those comments were even made. We’re playing bigotry telephone over here.

Upon learning of the alleged statements, initially all JLSA asked was that Kingston apologize to them, privately. Apparently she did. Privately. Her name was not out on campus and her apology was satisfactory and… then for reasons that are still not clear, Kingston was named publicly. Cue the Chuck Grassley accusing Dianne Feinstein music.

Once Kingston’s name was more widely known, Kingston issued a written statement to JLSA apologizing for creating an environment where the Jewish Law Student Association was singled out. We don’t know the full measure of her private apology, and we don’t know what specifically she apologized for, but her public apology notably did not include an apology for the specific statement about “Jew friends,” which she publicly denies making.

That apology — the kind of sorry-if-people-got-the-wrong-idea statement — was not satisfactory. At that point, with wider student body attention, a resolution was taken up by the SBA Student Senate to call on Kingston to resign.

At that point, the GW Law administration had to get involved. While Kingston could resign at any time, to force her out requires process and the law school and the university have a process they’d like to follow. Here’s a statement from a GW spokesperson, telling us what was communicated to the SBA Student Senate:

At the Senate Meeting on Tuesday evening, [Associate Dean of Students, Elizabeth Ewert] formally requested that the Senate discontinue its ad hoc process and instead consider referring the matter to the university bias reporting process.

This request bothered a number of students. According to one, they’ve never even heard of the “bias reporting process,” and felt like the university was trying to take over the investigation to shield Kingston from accountability.

This, by the way, is exactly what happens when faith in institutions is destroyed throughout an entire society. Why should the Jewish Law Student Association trust that there are people left in establishment positions willing to take bigotry concerns seriously? Have you seen, like, AMERICA?

The SBA Senate went right ahead in considering whether to call for Kingston’s removal. But the SBA executive committee has apparently closed ranks behind their president. Instead of, I don’t know, calling on Kingston to issue a better apology, it appears that they’ve latched onto this “bias reporting process” and gone full Kavanaugh defenders on the issue of process. Here’s part of a statement from another SBA executive committee member:

NOT EVERYTHING IS A CRIMINAL TRIAL! NOT EVERYTHING IS AN EXISTENTIAL THREAT TO THE PHILOSOPHICAL FOUNDATIONS OF DUE PROCESS! Sometimes, people in leadership roles are just supposed to resign when their leadership is compromised. I don’t know what this woman said, and neither do you. But I’m damn sure it’s possible to find a law student at GW Law who has NOT been accused of coming to get somebody’s “Jew friends.”

Of course, we are not allowed to have a Kavanaugh-style controversy unless it also involves beer. None of this would have risen beyond the level of law student motion-practice but for alcohol. You’d like to think allegations of anti-Semitism would be enough to make it an issue for the whole campus, but booze is driving this story.

You see, it’s almost Halloween, and at GW Law it’s called “Lawloween” and there’s supposed to be a big boozy party this weekend. [Ed. note: As your black friend I am contractually required to remind you that blackface is never appropriate.] Because of the power delegated to the SBA at GW Law, members of the SBA leadership are pretty much the only people on campus who can officially purchase and provide alcohol for student events.

Well, the members of the SBA executive committee have all threatened to resign if Kingston is pushed out. If they do that, nobody on campus is “qualified” to sanction liquor or provide it for other student events. A GW spokesperson explains:

Regarding the alcohol and funds at future events for students, the “freezing” of funds is a logical consequence of there being no Executive Branch—either due to voluntary or forced resignation or due to impeachment—when there is no oversight for approval of expenditures or oversight of events with alcohol, so those events could not occur until we had such oversight. That is especially true if some or all of the Executive Board also resigns. This is not due to any threats by the law school administration or the Dean of Students Office.

The SBA Senate voted to call for Kingston’s resignation, but she has until Monday to decide, and in the interim “Lawloween” is scheduled to move forward this weekend.

I don’t blame the students for caring about this. I certainly don’t blame the Jewish Law Student Association for taking this issue seriously. I don’t even really blame Kingston, who is just a law student and probably wrote the allegedly “insufficient” apology with an eye towards her future career, not the immediate firestorm.

I blame this gross country we now all live in. We are rotting from the head. Think about the messages we’ve told our students:

It’s all trash, and it’s all we get from watching the current administration in control of our government. Of course it’s going to seep into the deliberations of a student body that just wants to dress up as Black Panther and have a party this weekend.

If it were me, I’d be waiting to hear the one thing nobody in Washington, D.C., seems capable of saying: I’d be waiting for a real apology, and an acceptance of personal responsibility. And then take it from there.