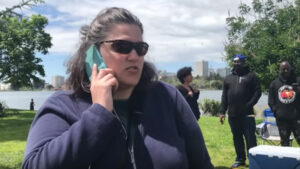 Sauntore Thomas sued his employer for racial discrimination and secured a confidential settlement. When he tried to cash his settlement at TCF bank, they called the cops on him.

Despite having an account at the bank for almost two years, the bank thought Thomas’s settlement funds were fraudulent, citing a “VOID” watermark on the checks that suspiciously wasn’t an issue when he walked over to a Chase bank and opened a new account and cashed the check on the spot. But even if the check aroused suspicion for some understandable reason — which there’s not a great reason to concede — immediately calling the cops evinces a hair-trigger unwillingness to believe and willingness to raise the stakes up to 11 for a black patron.

“Obviously, assumptions were made the minute he walked in based on his race. It’s unbelievable that this guy got done with a race discrimination case and he’s not allowed to deposit the checks based on his case? It’s absolutely outrageous,” said [his attorney Deborah] Gordon, stressing all of this could have been avoided.

“They could have just called the bank that issued the checks, and they apparently didn’t do anything because it would have all been verified immediately.”

For its part, TCF points out that the teller who alerted the police is also black, which isn’t really a defense because acting on racial prejudices doesn’t actually require being white. Still, TCF says Thomas trying to cash checks struck them as a “highly, highly unusual request.”

People shouldn’t have to avoid checks just to steer clear of racial discrimination, but why wasn’t this just wired to his account? If the settlement came directly from the defendant as in this case where he received three checks from his employer it’s a simple enough transaction. Even if the money had first been sent to Thomas’s attorney, it could have then been wired to him from the trust account. If there’s any commingling concern either put in the retainer agreement that the client will be responsible for the $25 transaction fee or just reimburse him on the back end.

Some social media observers cite the warm feeling of getting a check with a lot of zeroes, but it’s the 21st century. This is the age of direct deposit. Wiring money isn’t a perk of the rich and famous anymore.

Gordon filed a lawsuit on Thomas’s behalf against TCF on Wednesday. Assuming this settles, maybe go for the wire this time.