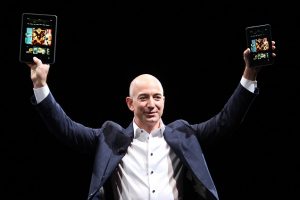 Donald Trump always gives the game away. From “Russia, if you’re listening” to “shithole countries” to “grab ’em by the p*ssy,” the president is committed to doing his law breaking out in the open. And so it was with his apparent efforts to deny a $10 billion defense contract to Amazon, the company owned by “Trump hater” Jeff Bezos.

Bezos, who owns the Washington Post, is a frequent Trump target because of the paper’s coverage of his administration and its Saudi allies.

“The American Media has changed forever. News organizations that seemed like a big deal are now extinct. Those that remain have now degraded themselves beyond recognition, like the New Yorker – or they’ve been purchased by Jeff Bezos to conduct unregistered lobbying for………

In July, Trump telegraphed the punch, saying that he was going to “take a very strong look” based on “complaining from different companies like Microsoft and Oracle and IBM” about the procurement process to award the JEDI (Joint Enterprise Defense Infrastructure) cloud computing contract. Trump’s deep understanding of military information systems was on display in an Oval Office presser with the Dutch prime minister when he explained, “We’re looking at it very seriously. It’s a very big contract, one of the biggest ever given having to do with the cloud and having to do with a lot of other things.”

How big is cloud? Soooo biiiiiiiig!

Amazon had long been presumed the front-runner, much to the chagrin of competing tech companies. But shortly after Trump’s comments, Defense Secretary Mark T. Esper committed to a “review” of the contract.

Four months later, Microsoft was the surprise winner, and Amazon vowed to sue. And unlike Donald Trump, who is always threatening to “open up the libel laws” and sue, Bezos wasn’t bluffing.

As usual, Trump’s own statements are Exhibit A. Exhibit B is a book by former Defense Secretary James Mattis’s aide Guy Snodgrass which claims that Trump ordered Mattis to “screw Amazon” out of a chance to bid on the JEDI contract all the way back in 2018. (That was around the time Trump ordered the U.S. Postmaster General Megan Brennan to double the shipping rate across the board for Amazon.)

So now Mr. Bezos’s lawyers would like to sit down with Trump, Mattis, and Esper to figure out if the president and his defense secretaries interfered in the JEDI contract to use the apparatus of the federal government to harm the president’s perceived enemy, as he promised to do from way back when he was a candidate in 2016, yammering to crowds that, “I have respect for Jeff Bezos, but he bought The Washington Post to have political influence … he owns Amazon … he wants political influence so that Amazon will benefit from it.”

But if Donald Trump thought Jeff Bezos was just going to roll over and let the matter drop, he’s even crazier than his hacker buddy Mohammed bin Salman. This ain’t over.