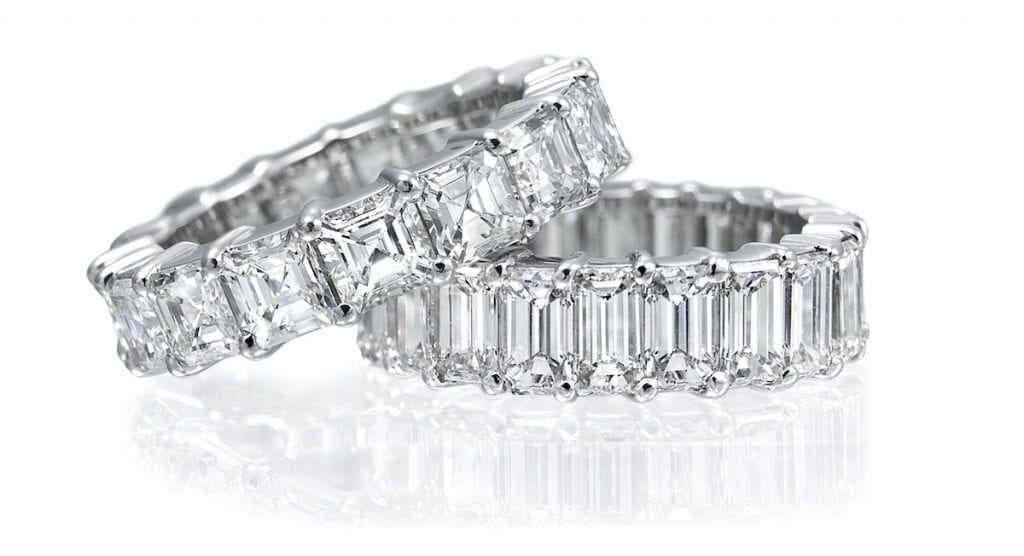 Years after the proposal was made, the vows have been said, and the wedding bands have been exchanged, many couples choose to wear anniversary rings to commemorate milestones in their marriage. Unlike the traditional solitaire diamond ring, there is no one classic ring style associated with celebrating an anniversary. Anniversary rings can come in several different styles; it all depends on your personal taste and how you choose to express your love. Here are three of our favorite anniversary band options.

Depending on the number of diamonds or gemstones used, multi-stone wedding rings can be a gorgeous way to mark a significant marriage milestone. Five-stone wedding rings like the one pictured above are a brilliant alternative to the traditional five-year anniversary gift of wood. Each stone represents a year of marriage, and depending on how the ring is set, more stones can be added as more years pass. Some people choose to add side diamonds to their engagement rings every few years, creating a sparkling all-in-one engagement and anniversary ring.

Symbolizing the eternal nature of love, eternity rings are another popular choice. Eternity rings feature a band of metal covered in a continuous row of diamonds or gemstones of the same shape. These are often gifted for a ten-year or twenty-year anniversary. With the rise in demand for fancy cut diamonds such as emerald and Asscher cuts, eternity bands are now available in a wide range of shapes.

Gemstone rings that represent the month in which you were married (or your spouse’s birth month) are a colorful way to celebrate an anniversary. Sapphires for September, rubies for July, and emeralds for May are just a few examples. Using gemstone accents in bridal rings is a rising trend, because it allows the wearer to express their individuality and adds a pop of color to white metal bridal stacks.

Do you have an anniversary ring? Which of these styles would you choose? Let us know in the comments!