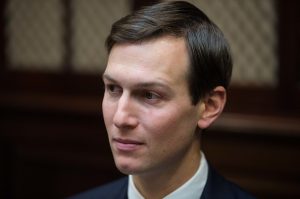 “The notion of the federal stockpile was, it’s supposed to be our stockpile,” the nation’s First Son-in-Law lectured America’s governors from the White House podium yesterday. “It’s not supposed to be state stockpiles that they then use.”

That Jared Kushner is a regular polymath, equally conversant on topics as diverse as federalism, the opioid crisis, the Middle East peace process, and emergency management. Which is to say, he’s willing to hold forth at length on a multitude of sh*t he knows nothing about. And the nation’s emergency reserve supply chain is no exception.

As Law & Crime’s Aaron Keller notes, the government’s emergency stash of supplies isn’t the “federal stockpile” at all. It’s the Strategic National Stockpile, as described in 42 U.S. Code §247d–6b, and it belongs to the entire country.

The Secretary of Health and Human Services is responsible for maintaining a supply of “drugs, vaccines and other biological products, medical devices, and other supplies” sufficient to “provide for and optimize the emergency health security of the United States, including the emergency health security of children and other vulnerable populations, in the event of a bioterrorist attack or other public health emergency.” In case of such an emergency — say, for instance, a viral pandemic that crashes the American healthcare system — the Secretary shall “in consultation with Federal, State, and local officials, take into consideration the timing and location of special events, and the availability, deployment, dispensing, and administration of countermeasures.”

So, it’s not “our stockpile,” as the MBA Princeling so ineptly put it. It’s OUR STOCKPILE. It exists for the express purpose of being dispensed to the states in a national emergency. And up until this morning, the website for the Strategic National Reserve said exactly that. Here’s the landing page language from 9am:

Strategic National Stockpile is the nation’s largest supply of life-saving pharmaceuticals and medical supplies for use in a public health emergency severe enough to cause local supplies to run out.

When state, local, tribal, and territorial responders request federal assistance to support their response efforts, the stockpile ensures that the right medicines and supplies get to those who need them most during an emergency. Organized for scalable response to a variety of public health threats, this repository contains enough supplies to respond to multiple large-scale emergencies simultaneously.

And here’s how it reads now:

The Strategic National Stockpile’s role is to supplement state and local supplies during public health emergencies. Many states have products stockpiled, as well. The supplies, medicines, and devices for life-saving care contained in the stockpile can be used as a short-term stopgap buffer when the immediate supply of adequate amounts of these materials may not be immediately available.

After Jared Kushner’s comment about how the Strategic National Stockpile is not supposed to be for states, lots of people pointed to the fact that its own website says it is.

The language on the website has now been changed.

My screenshot from last night vs. one from today: pic.twitter.com/UwJFAr7uoV

The new arglebargle about supplementing the states and use as a “short-term stopgap buffer” may be consistent with Trump’s protests that the federal government doesn’t want to be a “shipping clerk” for the states. But it’s not remotely consistent with actual federal law. Because congress is often dysfunctional, but no one in their right mind would force the states to bid against each other, driving up the price of supplies during a national emergency.

A pallet of expired N95 respirators sat in a warehouse in Florida last week, the prize in a bidding war among several states. The winning bid: more than $26,000. That’s $3.50 per respirator. A year earlier on the same auction site: 25 cents each.#COVID19
2/n pic.twitter.com/xuWzJrvmXT

But, as is so often the case in the Trump administration, reality and law must give way to fantasy and dogma. So the website gets memory-holed, and the states compete against each other to see whose citizens get ventilators that will keep them alive.