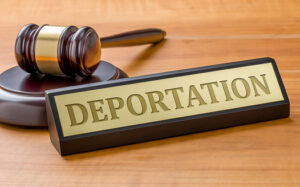 A Northeastern college student from Iran was granted a student visa to continue his studies after a yearlong review. The Trump administration’s shock troops at Customs and Border Protection took a look at his valid visa and decided to ignore it and marked the kid for deportation. So much for “if only people came here legally.” An emergency federal hearing on the matter resulted in Judge Allison Burroughs issuing a court order temporarily blocking the deportation until it could be assessed by the court.

And faced with this, Judge Richard Stearns, who got assigned the case proper (Hossein Abadi v. U.S. Customs and Border Protection et al), responded by declaring the case moot:

Stearns said in court that he didn’t think the government would “listen” to him, and that he did not [have] jurisdiction over the issue because Abadi had been deported, calling the case “moot.”

“This seems to be an issue for Burroughs, not me,” Stearns said. Church and Doyle contested that the emergency order was issued at around 9:20 pm– Abadi was not deported until 10:03pm, which would indicate the federal government violated the mandate. Doyle said later, “CBP has a history of ignoring district court orders.”

Are you fucking kidding me? “Ha ha. Yeah, those guys don’t listen to us… not much we can do about that.”

The student’s attorneys, Susan Church of Demissie & Church and Kerry E. Doyle of Graves & Doyle are planning to refile with Burroughs, who hopefully will have a harsher response to seeing an order she personally issued trampled on like this, but just because the order was issued by a different judge doesn’t make it any less an order of the court and Stearns had every bit of authority to protect the court itself from the government’s contempt.

With this shoulder-shrugging decision, Judge Stearns gives succor to the idea that parties can obviate stays by ignoring orders with impunity. If that’s the law then we may as well change the “least dangerous branch” to the “least effectual branch.” If there are no repercussions from this action, it’s a green light for increased abuse. It sets the precedent for not only ignoring court orders, but to the extent CBP will argue that they just didn’t know about the order before deporting him, it incentivizes bigoted meatheads to move faster to deport people, increasing the risk of tragic mistakes. Maybe Judge Burroughs will drop that hammer. Maybe Judge Stearns merely felt that punishment should be deferred to Judge Burroughs. Maybe.

The right answer here would have been to say that the habeas petition may be moot with the student no longer in custody, but that the court retains jurisdiction over the conduct of the parties to the matter. The marshals should then have been instructed to take whatever AUSA happened to be in the room into federal custody for contempt. It was the lawyer’s obligation to advise the agency to stay in compliance with the law and they failed. They will remain in the cooler until the DOJ at least offers, at government expense, to return to everyone to the status quo that existed before the act of contempt.

But even without such an aggressive response, the wishy-washy quotes Judge Stearns dropped do tremendous damage to the judiciary as a co-equal branch of government. It’s one thing to declare the case moot with a stern lecture that this is wholly inappropriate even though the court’s hands are tied and quite another to transform into Judge Eeyore and say the government just never listens and always disobeys orders. Projecting to the world that the courts are completely impotent is not a good look.

You’re a federal judge! Act like you’ve got some meager authority!