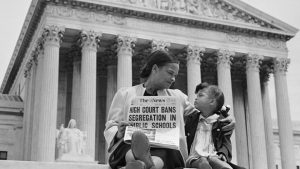 John W. Davis lost this day and Spessard Holland threw a fit about it for the next decade. (New York World-Telegram & Sun Collection/Library of Congress, Washington, D.C. (digital file no. cph 3c27042))

Aunt Jemima is the best-selling syrup brand in the United States and it’s not even close. Changing the branding of a successful product is a dicey business move even if it’s a pretty straightforward moral one. Now, roughly a bazillion years too late, the Aunt Jemima brand will be ditched.

Few law firms occupy the rarified air of Davis Polk & Wardwell. It boasts a top 20 Am Law ranking and sits as one of the handful of firms that every major institution considers for high-stakes legal representation across all practices. But as we enter the long overdue era of ending the memorialization of long-dead Confederates and their fellow travelers, Davis Polk should have a serious discussion about rebranding.

John W. Davis, was one of the most prolific Supreme Court advocates in history, arguing more cases at the high court than almost anyone. That certainly makes for an impressive sentence before you start asking about the big cases he was arguing. He secured the legality of “grandfather clauses” to ensure that literacy tests only suppressed the rights of black voters and represented South Carolina in the companion case to Brown v. Board. Building a book of business around being “the go-to lawyer for Jim Crow” is certainly one strategy.

Lawyers can, of course, argue cases they don’t believe in and shouldn’t necessarily be vilified for doing their job. But lawyering is also a business and at a certain level, attorneys get the work they’re seeking out. It’s not an accident that Davis kept getting tapped by segregationists in their constitutional fights. Davis had argued for black voting rights while serving as Solicitor General, but when he returned to private practice he showed little hesitation in jumping the aisle. In Briggs, the Brown companion case, there’s even a historical dispute over whether or not Davis accepted no payment for his work because he lost or if he took on the matter pro bono from the start. You know, when “for the public good” was somehow interpreted as “segregating schools.” No matter how one cuts it, those aren’t the actions of a dispassionate advocate just doing their job — that’s someone with skin in the game. White skin, as it so happens.

Davis Polk isn’t alone in sporting a troubling name. Holland & Knight is named after Spessard Holland, a Florida politician from the era when the state was a lot more Baja Alabama than South Beach. He signed the “Southern Manifesto” condemning Brown v. Board and attempted to defeat the 1964 Civil Rights Act by filibuster. Holland served in either the House or the Senate for 30 years and grounded his political fortunes in defending Jim Crow laws.

Most people never think about Biglaw namesakes (though we’ve been pointing these guys out for years). It’s doubtful if anyone even considers the men behind these names when they glance at the letterhead. But that doesn’t mean there isn’t some ugliness lurking there.

There are problematic people throughout history. For all I know, John Lambert Cadwalader clubbed baby seals. But when it comes to people like Davis and Holland, we’re not talking about people we can honor in spite of their racial politics because their racial politics were integral to their legal legacies. Davis used his practice to further the bloated corpus of racist constitutional law and Holland was a segregationist politician. There’s not much to Holland’s career beyond politics — he was barely even a practicing attorney, having only worked at the firm that bears his name for about three years. These firm names are memorials to icons of a racist past that deserve to be junked.

Obviously these are global brands. Am Law 50 firms with decades’ worth of reputation built on their names. But so was Aunt Jemima syrup. If anything, their success should afford the firms more freedom to rebrand, not less. Whatever name DPW could come up with would still command respect around the world — the sophisticated clientele that hire Davis Polk attorneys aren’t going to be confused. Legal circles almost never used the words “Berkeley Law.” Berkeley WAS Boalt Hall… until it wasn’t. It’s unusual to point positively to something Dewey Ballantine did, but that might be a good template to follow — hire a household name like Thomas Dewey was at the time and reorient the name around that person. Go be Obama Polk & Wardwell.

And for Holland & Knight… well, being the Knight firm just sounds cooler.