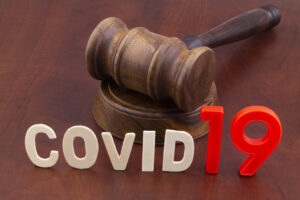 Based on recent headlines, a casual observer could conclude that Biglaw is in a state of meltdown — but that wouldn’t be correct. As I said in a recent interview with Bloomberg Law, although the legal industry currently faces “a time of uncertainty,” it’s “not in freefall.”

Take a closer look at the firms that have announced cost-cutting measures such as layoffs, furloughs, and compensation cuts. The roundups here at Above the Law and over at the American Lawyer list 76 and 70 firms, respectively. But a number of the mentioned firms are small firms, midsize firms, or even overseas entities. If you exclude those firms, you’re probably talking about, at most, a third of the Am Law 200.

The fact that most Am Law 200 firms have not had to implement any cost-cutting measures suggests that a significant number of Biglaw firms are weathering the current storm reasonably well. To be sure, the list of firms engaged in belt-tightening grows each week, and many analysts believe that we’re seeing only the tip of the iceberg. But it’s also worth noting that several firms feel comfortable enough with the condition of their coffers to announce to their employees that they will not be cutting salaries or conducting layoffs.

Now, these “no layoffs” assurances aren’t legally enforceable, and those of us who were around during the last recession can recall how some firms that made such promises wound up going back on them. But it’s safe to say that at least some firms will emerge from the current crisis relatively unscathed, as is the case with pretty much every downturn.

For firms that are in the fortunate position of holding up well, here are four recommendations for how to use the current crisis to enhance employee loyalty, burnish your firm’s reputation, and do the right thing:

1. Make gestures of generosity, if you can afford them.

These are trying times for many American families. And while households with at least one Biglaw lawyer or staff member are among the most fortunate, this doesn’t mean that they’re immune to economic difficulty.

Imagine a family of four where one parent is a Biglaw administrative assistant and the other parent just got laid off from a job as a restaurant manager. Or picture a family that’s a bit more privileged, a Biglaw associate married to a journalist who, while not laid off, just got hit with a pay cut. These families still have kids to support and bills to pay — and they could even have unanticipated new costs, such as medical bills related to coronavirus treatment.

They could use whatever help they can get from the firm. So kudos to those firms that have stepped up to the plate with such measures as bonuses to help out with unexpected expenses or technology stipends to help employees work more efficiently from home.

Even more modest measures go a long way in terms of increasing employee appreciation and loyalty. For example, some firms have sent meals or care packages to employees who they knew had, or had a family member who had, COVID-19. These gestures aren’t expensive, but they are deeply appreciated by those who receive them.

2. Be understanding and flexible regarding the challenges your employees face.

My colleagues and I speak to many associates in our roles as legal recruiters. These days, because lateral hiring of associates has slowed, many of our conversations are check-ins, as opposed to discussions about specific jobs.

I checked in recently with one associate who expressed some frustration about their firm. The firm seems to be doing well and hasn’t announced any austerity measures. But what this associate found frustrating is the firm’s acting as if it’s “business as usual” — when, for many associates, it’s not.

This associate is a working parent, and their spouse works as well. They have a young child and, because of the quarantine in New York, no child care. They’re both working remotely while also dealing with the added challenge of caring for their child, which means that getting work done is much harder than usual. It would be nice if the firm acknowledged the challenges that associates and staffers face right now — in terms of child care, elder care, or sick family members, to name a few — and reassured them that the current circumstances would be taken into account when evaluating performance.

For example, take the issue of billable hours. Should billable-hour requirements be waived or pro-rated to reflect the difficulty of accumulating billables while dealing with many other priorities? It’s an issue firms should start considering, even if the end of the year is still far away.

This point flows from the preceding one — and, unlike giving a tech stipend or pro-rating hours requirements, it costs a firm truly nothing. When in doubt, firms should communicate more rather than less; a little communication goes a long way.

Even during normal times, law firms have never gotten high marks for transparency. And in times of great uncertainty and anxiety for lawyers and staff, clear communications about where the firm stands and what its plans for the future are matter more than ever. We certainly know that associates at firms that have been more transparent greatly appreciate their firms’ honesty, openness, and reassurance.

4. Step up your pro bono game.

During difficult times like these, the need for pro bono work is greater than ever. And because of the slowness that at least some lawyers and practice areas are experiencing, many lawyers have more free time to spend on pro bono matters.

A number of firms have risen to the occasion. For example, some 34 law firms, including Kirkland & Ellis, Willkie Farr, Goodwin, and Covington, have joined together with the Lawyers for Good Government Foundation to help small business owners navigate the complexities of the federal government’s COVID-19 stimulus package (which isn’t easy to figure out, as explained in this client memo by Jesse Panuccio and Simon Leen of Boies Schiller). The small-business pro bono program got started here in New York City, where Kirkland & Ellis pro bono counsel Jacqueline Haberfeld and other law firm representatives approached the City Bar Justice Center with the idea.

As Brad Karp, chairman of Paul Weiss — a longtime leader in pro bono work, which in March launched an online Coronavirus Relief Center to help individuals and small businesses — put it in a recent Q&A with Law.com, “Millions of Americans face economic ruin; gratuitous actions by state and federal authorities put inmates, migrants and others at extreme risk; and our democratic institutions are being undermined. If we, as lawyers, don’t step up to safeguard the rule of law and those in need, who will?”

The answer should be: all law firms and lawyers. Yes, it’s important for law firms to look after and support their own people during these trying times. But it’s also critical for Biglaw firms, who are in a relatively privileged position compared to many other businesses and industries, to look beyond themselves and to help their communities and country.

At some point in time — hopefully sooner than later, although right now it’s anyone’s guess — the COVID-19 pandemic and its economic fallout will be behind us. If you’re a law firm leader, you’ll be asked, “What did you and your firm do during the crisis?” So take actions today that will allow you to answer this question with pride tomorrow.

David Lat, the founding editor of Above the Law, is a writer, speaker, and legal recruiter at Lateral Link, where he is a managing director in the New York office. David’s book, Supreme Ambitions: A Novel (2014), was described by the New York Times as “the most buzzed-about novel of the year” among legal elites. David previously worked as a federal prosecutor, a litigation associate at Wachtell Lipton, and a law clerk to Judge Diarmuid F. O’Scannlain of the U.S. Court of Appeals for the Ninth Circuit. You can connect with David on Twitter (@DavidLat), LinkedIn, and Facebook, and you can reach him by email at [email protected]